Caching data is an essential part in many high-load scenarios. A local 1st-level cache can augment a shared 2nd-level cache like Redis and Memcached to further boost performance. An in-process cache involves no network overhead, so the cache speed is only limited by local resources like CPU, memory transfer speed and locking. tCache is a production-proof local in-process cache for the JVM, which is part of trivago's OpenSource Java library triava (Apache v2 license). This article outlines cutting-edge features like data-aware evictions that are operating near lock-free.

tCache takes a creative approach for near lock-free evictions and supports data-aware evictions. Its key features are:

Configuration of features is individual per Cache instance, by using a cache Builder:

Entities in a Cache should be consistent with the origin server. When a customer entity gets changed in a Database, the entry in the Cache is not valid anymore. tCache supports various ways to remove Cache entries.

The problems of mass insertions and mass deletions

Load-spreading can help and is an intrinsic feature of tCache. Entries can automatically get individual expiration times within a given interval. This time interval is configured when constructing the Cache as "cache time spread", so a simple cache.put(key, value) can assign the cache entry a lifetime between 4 and 5 hours. The same is possible for explicit deletions, a call to cache.expireUntil(key, interval) will remove the entry from the cache sometime between now and the end of the given interval. Thus the interval based functionalities "cache time spread" and "expire until" are useful in scenarios with mass insertions and deletions respectively. They are guaranteeing a better load distribution on the origin server for the next re-fetch, as not all elements that were mass-inserted once will expire at the same time.

When the cache is full, tCache offers three options:

By default LFU eviction is being used. One can also use LRU or an own implementation:

Above is a complete eviction implementation. It is data aware, inspecting the CustomerType. The value returned by getFreezeValue() is used to sort the entries for eviction. Here it ensures that entries of type Premium are evicted last.

For reaching a high read and write throughput, specific workload is done in background threads:

The speed of any cache depends on the usage pattern. Important factors are the write rate, the hit rate and whether elements get expired or evicted. The following graphics shows a benchmark of tCache in comparison with other cache implementations. The Cache2K benchmark performs 3 million get requests using a Loader. The access pattern varies, for example Eff95 represents a 95% hit rate. 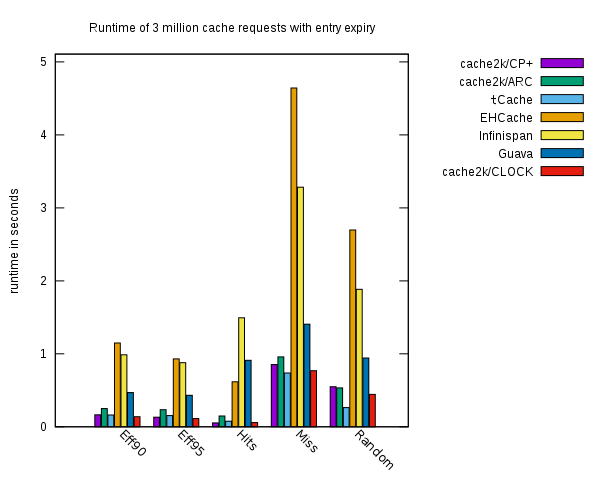 tCache is fully production ready. It is used in trivago's backend systems since 2010, in normal settings as well as in high-throughput scenarios including lots of evictions. In the past 5 years the library has evolved in features (put-if-absent, CacheLoader, custom evictions, ...) and in scalability (asynchronous evicitons, TimeSource, ...). Another article will go deeper into those scalability details. The road to the future is wide and open. Possible additions are a load-spreaded background prefill via cache.putAll(keys, interval), serialization and deserialization of a complete cache, heuristic evictions and ideas from future contributors.

To get started with tCache, code examples are available. You can download it as part of trivago's OpenSource Java library triava under Apache v2 license. If you tried, please leave your feedback and feature ideas here.