We, Marcos Pacheco and Marcus Tannerfalk, work as Agile Coaches in the Palma office for the hotel search company trivago. This is our experience in working with a development team in daily sprints with the goal of delivering a MVP (minimum viable product).

One of the development teams that we work with wanted to create an MVP (minimum viable product) for a new feature that they are responsible for. We suggested to do this as a one-week hackathon with daily sprints, which we have never tested before. So how small is a Minimum Viable Sprint (MVS)? Can it be done in one day? This article describes our approach and what we learned from this experience.

We always strive to have teams as empowered and autonomous as possible. This specific team had the following members: product owner, dev lead, front end dev, back end dev and two quality assurance engineers (QA). One of these QAs wanted to try to work as a developer, which we of course embraced.

To be prepared is without saying, super important, due to the obvious reason of not losing any of the precious time that you want to spend on development. The following are the main points that we prepared before starting the hackathon:

We really wanted everybody to be on the same page when starting a week like this, so we had a kick off for the hackathon week, talking about what was vital for this to be a success.

We also had a strong emphasis on the plan for the week, since this was something new for us all.

Expectation management or futurespectives are always interesting. We therefore created a baseline to be able to measure the success rate in the end. With a simple exercise, described below, we gathered everybody’s expectations. The result can also be seen in the picture.

Write on a post-it: What am I most looking forward to during this week?

As some of you have already noticed, we do not have a dedicated Scrum Master for this team, and we did not have that during this week either. This specific team has reached a level of dynamic where they communicate and remove impediments by themselves without having someone to ask or help them to do that. Therefore, it is our role to be more of an observer, coach and facilitator, when needed. The daily stand-ups were done by the teams themselves, including deciding on the daily sprint goal, with us just observing from time to time. 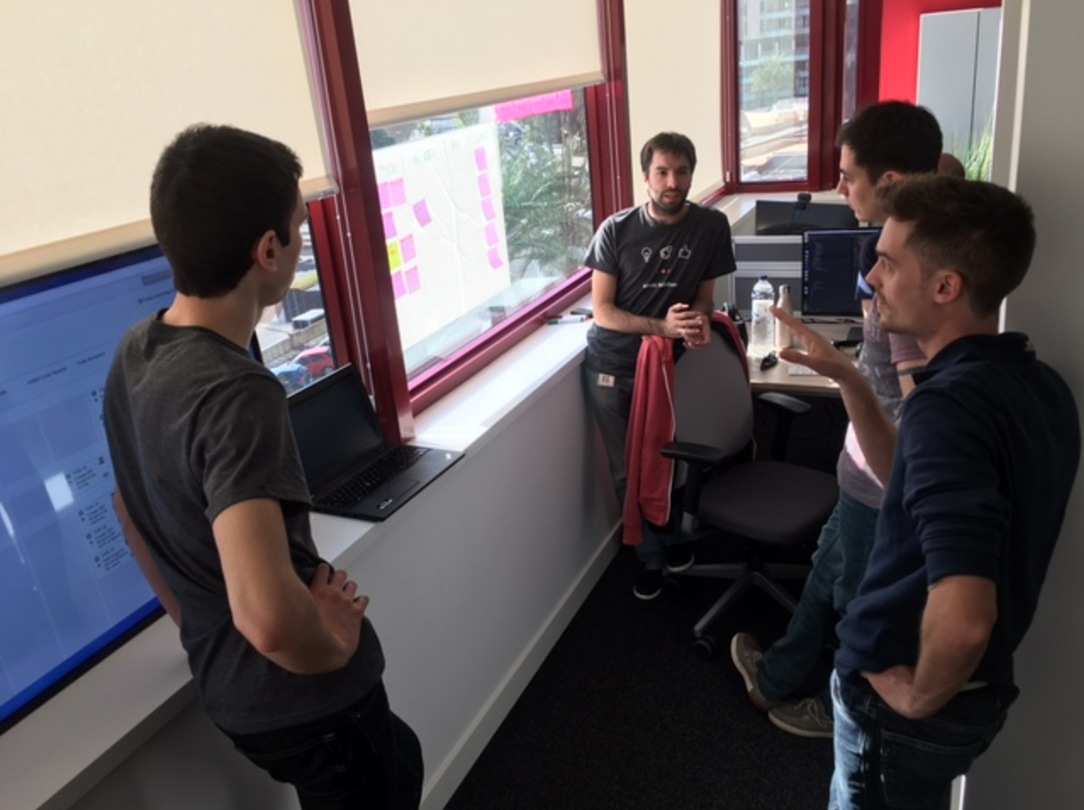 Although we had daily sprints, we did not have formal retrospectives for each of them, because that would have created way too much overhead. We just added a simple question to the daily stand-ups: “Is there a need for any changes?”. And based upon that an action was taken, or not.

The formal retrospective was planned on the Monday after the hackathon week was finalized.

We allocated 1.5 hours, and since parts of the team had travelled back, we had to do a remote retrospective, which always complicates the ceremony a little, but we did it with the following setup. One web camera pointing towards the flipcharts and one laptop showing the room, so the people in the remote office could see both the people and the flipcharts. 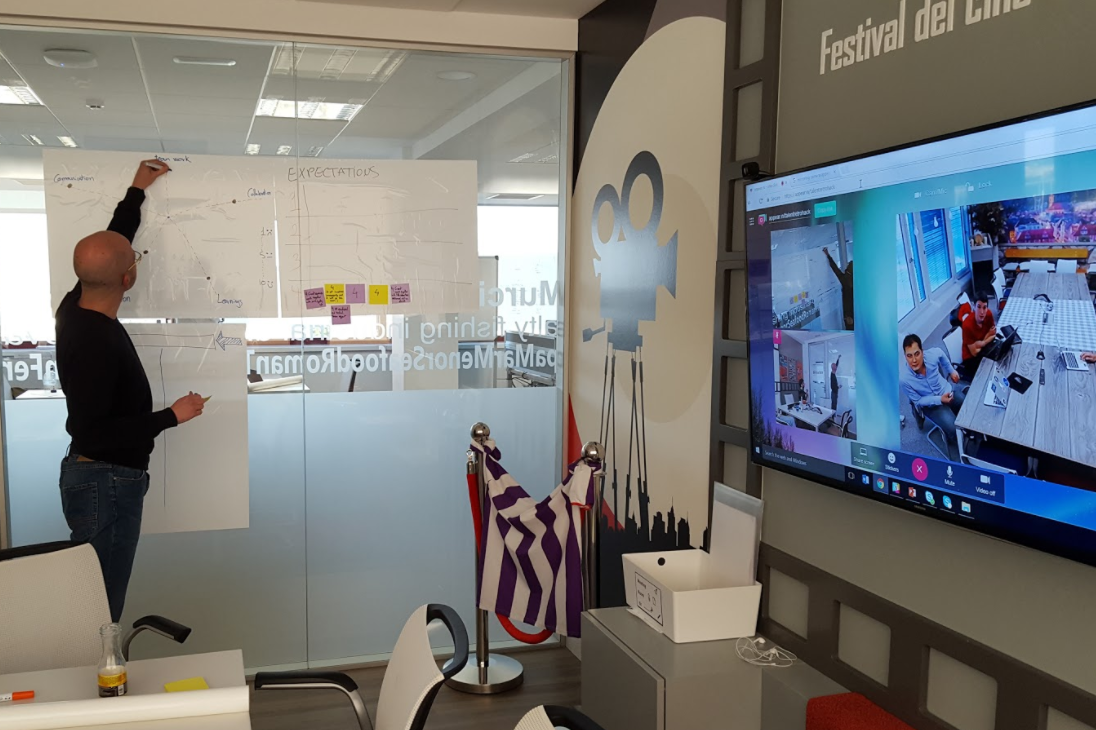 Starting off with understanding how well the team’s expectations were fulfilled, we asked the members to rate them from one to four, where four was “perfect” and one was “not so much”. 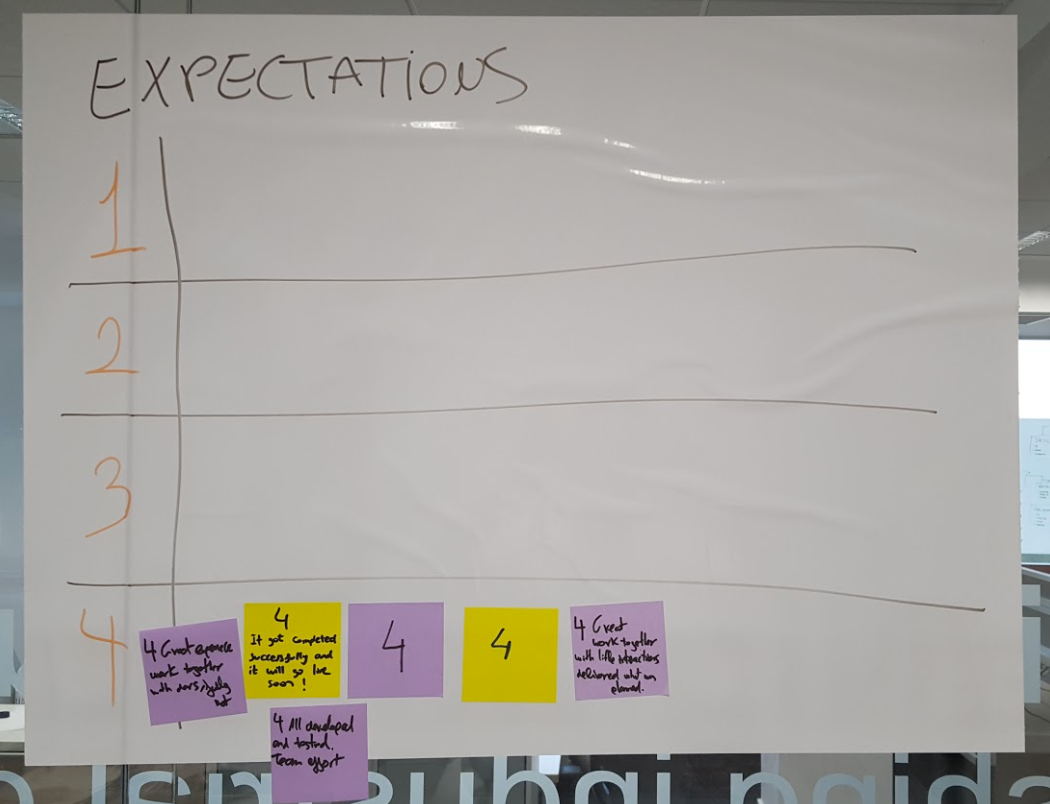 As you can see, everybody rated the maximum score, which was super nice to see! Comments on the post-its:

Step 2 - What happened and why

We wanted to get the team's opinion on which factors exactly contributed to the project's success, and to what degree. To guide the team a little, we predefined factors that might have had an impact on this hackathon, such as: 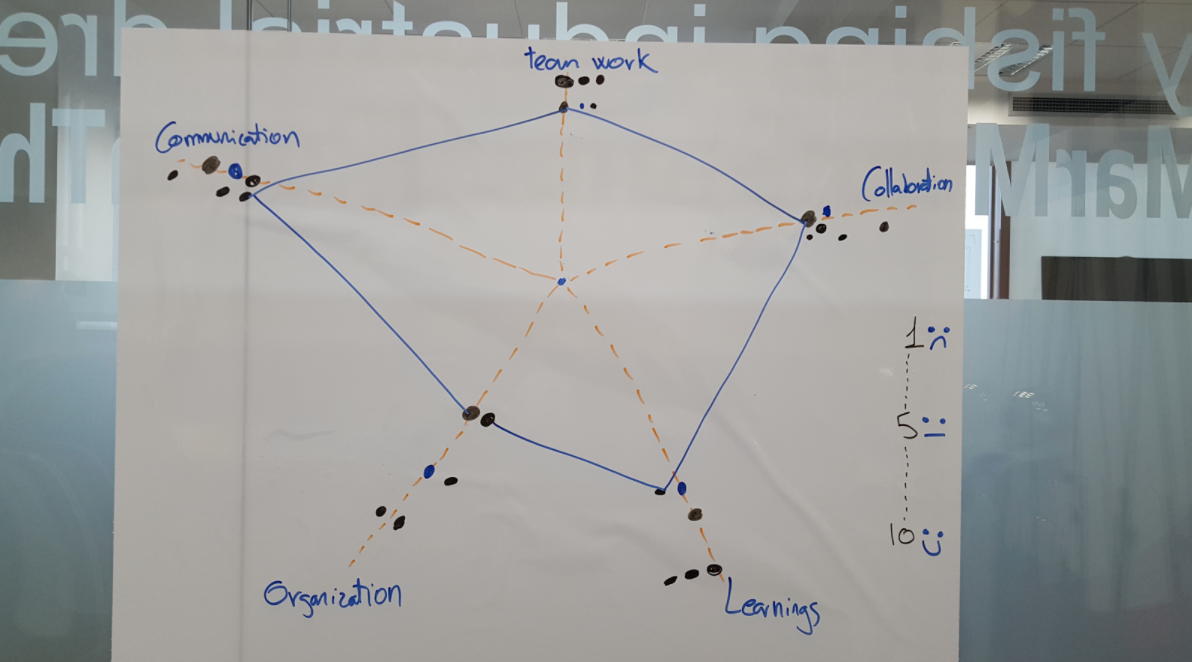 Everyone rated the outcome and gave constructive feedback. For example:

Organization (plannability) received the lowest score, and was then decided to be discussed further. 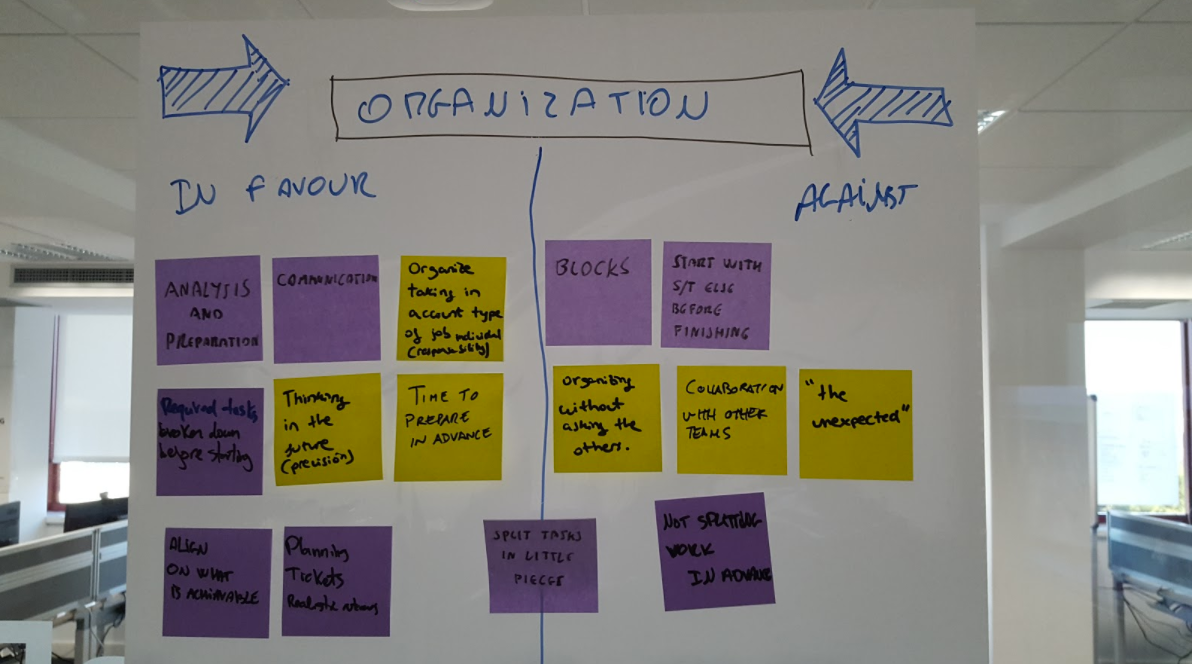 These were the comments on the post-its:

Against (stop or improve) 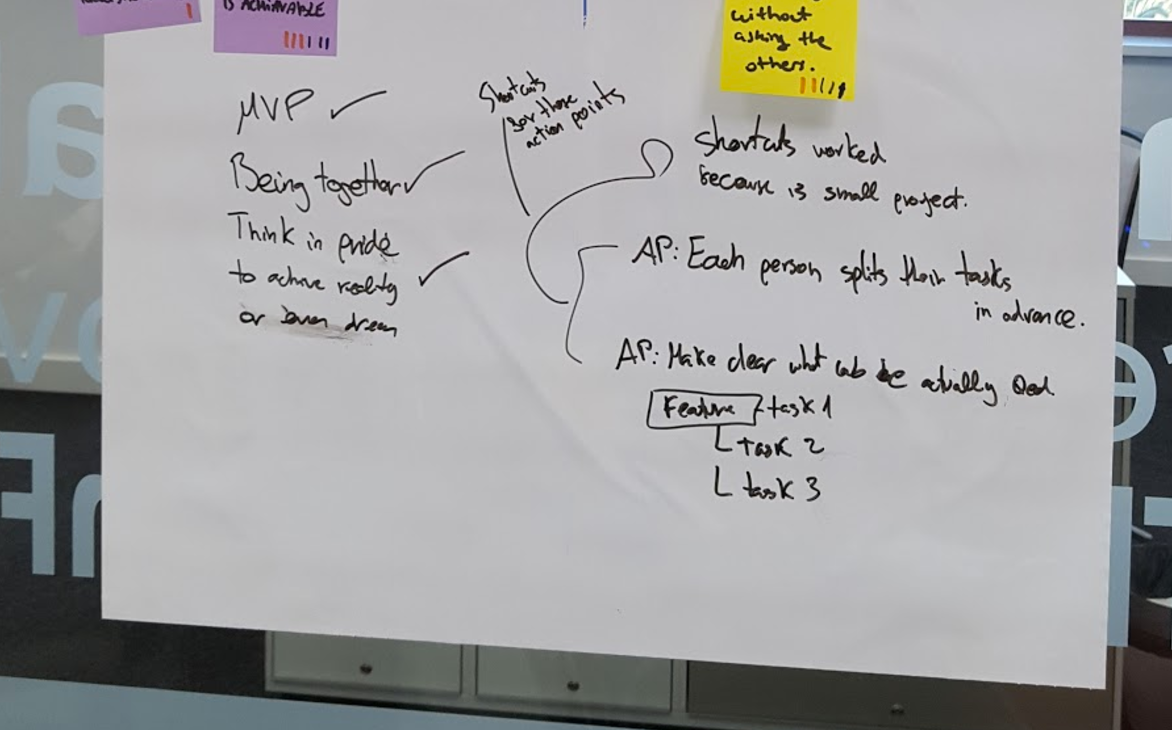 Further discussions concluded in a consensus; that it really helps to target MVPs and being together.

One of the team members also said something really interesting about the mindset of how to plan better, in terms of being realistic and what could be achieved:

Plan with pride, think realistically and achieve a dream!

It was also mentioned that the team had to take some shortcuts during the week, because of the planning difficulties. Shortcuts that probably would have not worked in bigger teams or projects.

Recommendations to avoid these shortcuts:

This was overall a great experience, with collaboration and communication excelling. We did have a great baseline in the team, with them already having a well working team dynamic and being motivated and open to participate in this experiment.

Hackathons are generally about learning and inspiration, so combining this with value creation of building an MVP was a great experience for the team. Testing new roles during an event like this is feasible. But you might add a risk in lack of knowledge then. On the positive side, you will gain drive. And in our world, the drive of learning new things always trumps knowledge.

Generally, having specialist roles like QAs could possibly create unnecessary bottlenecks. It is much more preferable to have a more test driven development process. The workload can then be more evenly distributed.

The daily planning could have been even better, by preparing the following day's objectives at the end of each day. And on the following morning, go more in detail and make sure that all is clear, and all requirements are there.

The team suffered by not being aligned with the external teams, such as operations, trying to be really fast and then having to wait unexpectedly, because an external team that is not participating in the hackathon needs to take action, can be really frustrating.

Also having a more defined Definition of Done, not only for the developers, but also for the product owners, who creates tasks and the business specifications, would have been preferable.

The whole team rating their expectations being met in full is great, but might be a false positive. We have to consider that it is highly unlikely, but of course plausible, that everybody had such an awesome experience. It is easy to be influenced by others when presenting publicly, so we will think of opportunities to reduce the bias.

The definitions of what we called "the factors" were not clear. We realised this when executing the exercise, and the obvious example is what was called Organization, which were more related to the ability to plan i.e. planability.

Another improvement area is that there was not enough time to discuss all factors in depth, which might have left out important information or comments.

And finally, preparing in advance is always beneficial, and especially when you are having people from different offices joining.

The One Week Hackathon is the perfect extension to the popular Google Ventures Design Sprint concept by creating a MVP out of a realistic prototype.

We would highly like to recommend others to try the same type of concept!