Having such data stores in public clouds could be quite costly in terms of money and performance, especially if you use applications written in languages with garbage collection mechanics, such as Java. But is there any way how to optimize the performance of such storage-services?

Let’s consider a few use-cases and optimization techniques and show why we use a set of concurrent wrappers around primitive maps.

Imagine there is a simple Java-record:

Note: Project Lilliput proposes to reduce the Java object header by half or more.

Considering we store not just a few, but billions of such records, let's compare the memory requirements of each storage scheme:

It shows that, by having a big data set, we could optimize our memory a lot (~ 80%). But at first we have to pack the bits into some lighter (in terms of memory) data structure.

As you see above, the payload requires only 62 bits, that could be fit in a long (int64) primitive:

Now, let’s try to encode a Bid to a long primitive. The idea is pretty simple: Step by step, we encode every Bid-field into bits, apply int64 bit mask and shift the new value using its own cardinality. For encoding we use a generic BitmaskEncoder:

Here’s an example of how it could work for our particular case:

Finally, let’s see how we can encode some record into long value:

What we use for storing primitives

Now we have our bit-packaging algorithm and we want to be able to store our records in some collection.

We could consider standard ConcurrentHashMap<K,V> , but it requires storing key and value both as reference types. This means that, even if we pack our bits into a long value, we would have to store this value in a Long wrapper. This brings with it an additional overhead of at least 128 bits for the Java object header, which we tried so hard to eliminate.

In production, we use fastutil, because, based on our internal benchmarks, it shows better performance for read and write operations.

The original fastutil library supports the concurrent versions of maps based on java.util wrappers, which has the following definition:

You can see that there is a single mutex for the whole map. Such an approach could be very costly in terms of latency of calculation. That’s why we implemented and open sourced our own concurrent wrapper over fastutil maps — Fastutil Concurrent Wrapper.

It works with striped ReentrantReadWriteLock, which gives better performance on reads and holds the lock only per one bucket. There are two different locks mode:

In situations where you need to have the low latency processing, the second mode, BusyWaitingMode, can provide better throughput and average time per operation, avoiding calling LockSupport.park().

Let’s look at a part of the BusyWaitingMode implementation:

Note: right now, Fastutil Concurrent Wrapper does not support the concurrent version for every primitive map from original fastutil library. Contributions are welcome!

For benchmarking, we compared 3 instances with 3 different storage variants each:

Benchmarks were done during one of our heavily-writes period, with ~ 300k max writes/sec for every considered instance: 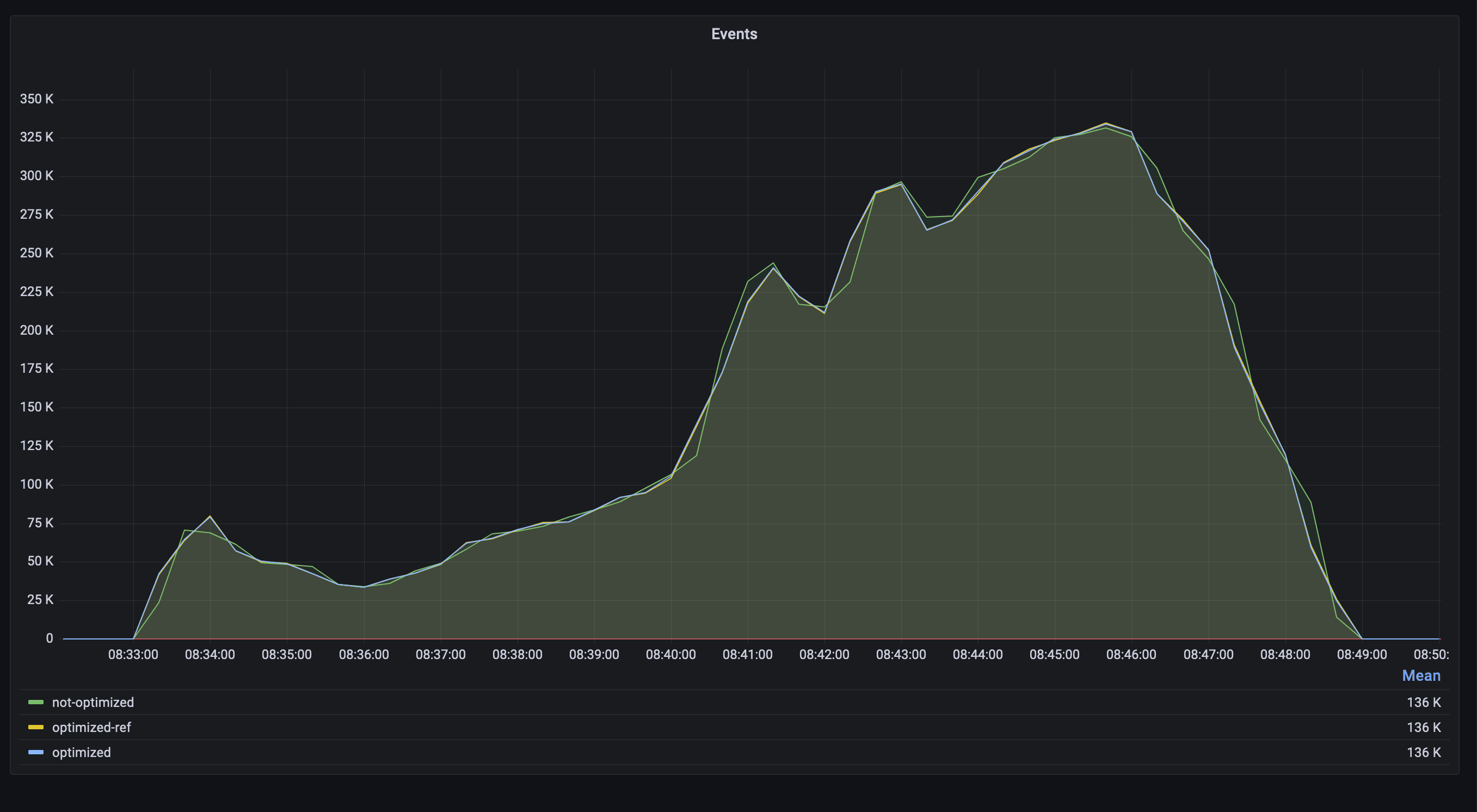 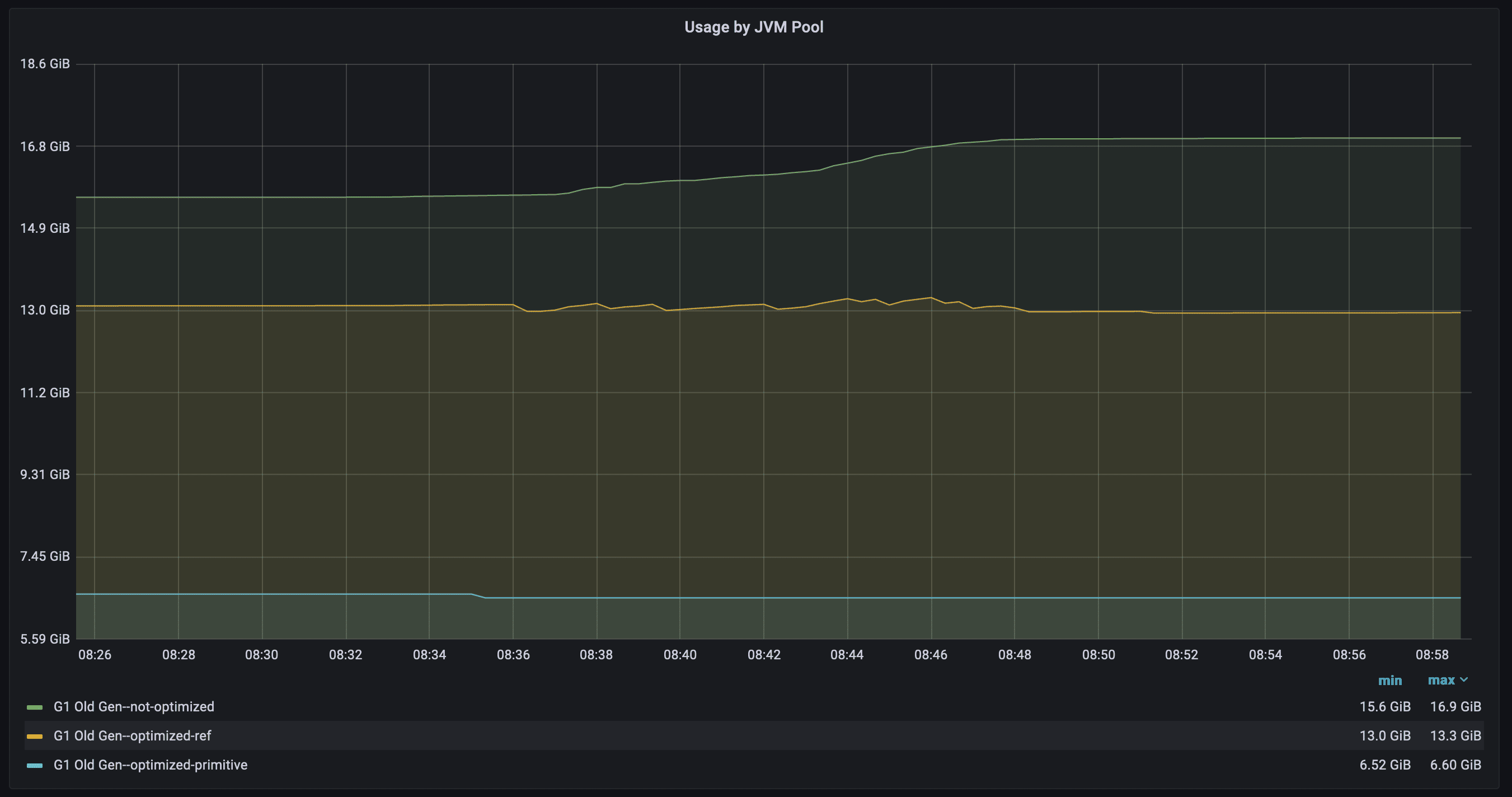 Consider the memory occupation in Old Gen we can see, that our optimized maps occupy only 6.6 GiB max, while other variants with ConcurrentHashMap 13.3 GiB and 16.9 GiB respectively.

The reason for such a big difference is having keys and values as primitives, without any Java-object header overhead and avoiding Java-records.

Now we check what overhead both Java-object header and structures give to CPU and GC usage: 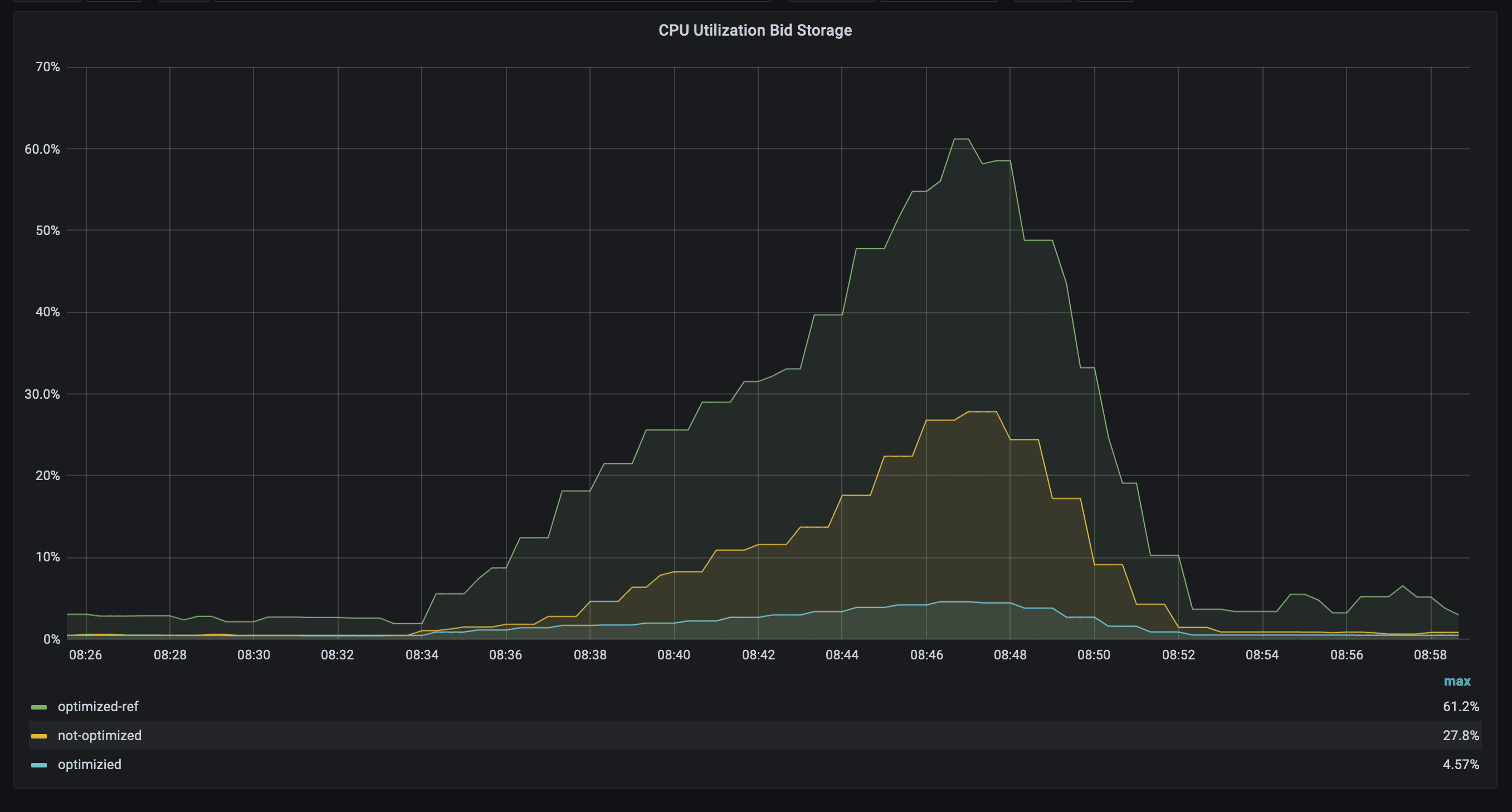 The picture shows how much CPU was burnt for allocating a new piece memory for records as well as GC-work. Interestingly, that not-optimized version has used less CPU compare to optimized-ref. The explanation is: for packaging, the service had to burn an additional CPU, when not-optimized just allocated a piece of memory for records and put it into the map. But most important is: our optimized primitive maps version has burnt much less CPU: ~4.5% vs ~28% vs ~61%. 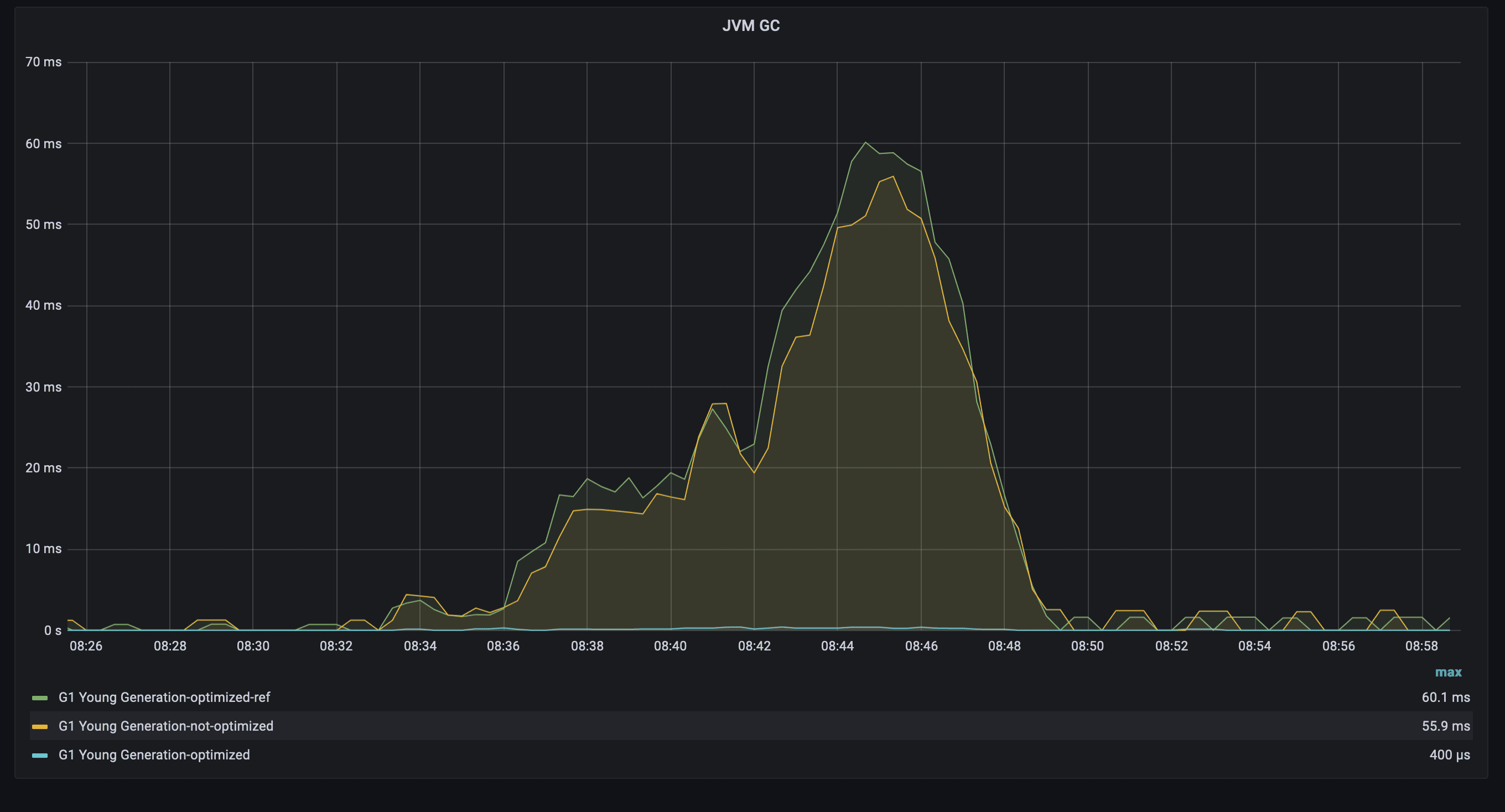 Equally, interesting results for GC (young generation): the Garbage Collector of the optimized version ran for ~400 microseconds, while the other versions ran ~55-60 milliseconds (even with -XX:AutoBoxCacheMax). The difference arises mainly because of large allocations during write operations.

There are a lot of different ways of optimizing your live-traffic application, which could save money and latency. We have considered options for optimizing stored values with certain cardinalities. You could use bits-packaging and Fastutil Concurrent Wrapper, as well as some JVM flags like -XX:AutoBoxCacheMax.

Nevertheless, trivago offers many more interesting challenges to be solved. Check out our open positions if you’re keen to come solve puzzles with us. 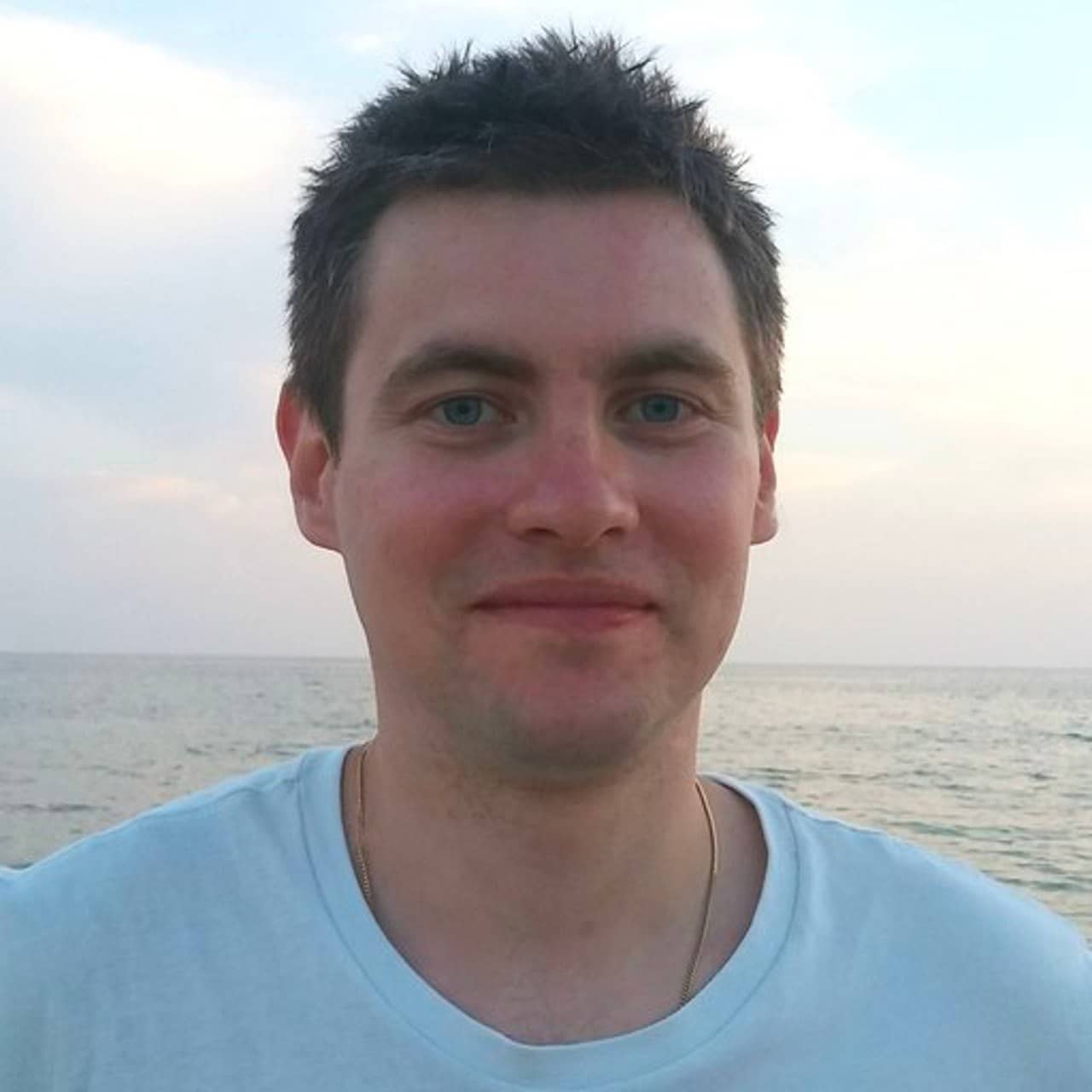