The trivago backend needs to consume vast amounts of data on advertised accommodations in order to make the best decision about which accommodations to show to our users. Our inventory contains more than 11 million accommodations and for each of them we need access to type information, ratings, coordinates, categorizations, historic data, etc.

Access to accommodation data needs to be fast as there is a user waiting for our response. Hence, in our previous setup, a Java-based microservice consumed all the data on startup, kept it in memory and updated its data on arrival by subscribing to a stream. While this approach shines due to its simplicity, it cannot compensate for its biggest downside: the startup times. Our service required more than five minutes to start.

What can be wrong with reading huge amounts of data on startup?

Consuming gigabytes of data on startup prolongs the readiness to five minutes and longer. We wrote more about the topic of Kubernetes life cycles in a previous blog post.

The long startup times pose a problem to our operations and iterative development:

While the slow startup times are the main issue with this approach, it has more downsides that can be critical, too:

Before we dive into our solution to these problems, we’d like to briefly show you trivago’s backend architecture. In trivago’s backend, data flows in two different circuits. Requests and responses are forwarded from one service to another via gRPC (or other protocols over TCP). The backend services are connected to Frontend/Interface up-stream and to our advertisers down-stream. Source data (input) and business data (output) are consumed and produced via Kafka. 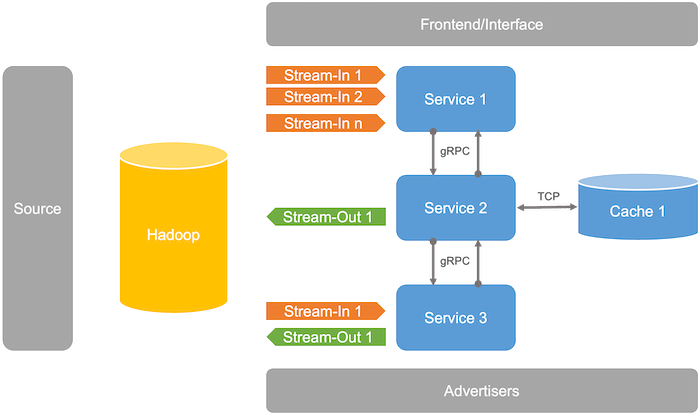 The source data is ingested via a database, a CSV file or any other form by dedicated teams within trivago (simplified and summarized in the diagram above with “Source”). The business data is produced by the backend Java services in the form of logs. Kafka topics are also available in our Hadoop cluster that allows analyzing, manipulating and combining of data.

Separating the data from the logic

In order to transform our microservice into a lightweight, scalable and reliable unit within our backend architecture, we decided to outsource most of the data to a Redis multi-node setup. We chose Redis because of two reasons:

We use Redis in a leader-follower setup. All writes are executed against the leader and all reads are handled by the followers. The routing rules - to ensure that each operation ends up on the correct Redis node - are configured via the service mesh Istio. The followers automatically synchronize with the leader in an eventual consistency model. Updates to the dataset occur once per day only, keeping the load for the synchronization of the followers low and well scoped.

In the service processing the user requests, the data for all accommodations relevant to the specific search is fetched in the beginning of the request flow with a single MGET operation. We use the reactive API provided by Lettuce and allow client-side pipelining of operations. This way, we can keep the network overhead minimal. Client-side caching for the most frequently used keys was not implemented because latencies are adequate without the additional layer.

Without the necessity of consuming large amounts of data, the service starts up in less than a minute. That resolved most of the problems in regards to the scalability of the service. We also observed significantly lower scaling demands for the Redis followers in comparison to the service, that is quite compute-intensive. In other words, we need to scale the data less than the computation and can use the cluster resources more efficiently.

From Hadoop to Redis

The updates from the Hadoop workflow are sinked into a new Kafka topic that is mirrored globally. From Kafka, data can be pushed to a consumer via a Kafka Sink Connector. To keep Redis in-sync with the Kafka topic, we use the Redis Sink Connector.

The Hadoop workflow gives us control over the data we push to production. For instance, sanity checks after the join operation can prevent publishing faulty data to production. We also set-up a preview environment to validate changes in a pre-production environment.

“Anything that can go wrong will go wrong” (Murphy's law). Therefore, we implemented a disaster recovery that allows us to replay the accommodation data from a previous day, if something failed on the publisher side (e.g., missing or broken data). The Redis leader persists its databases to a disk. Via Kubernetes, we take snapshots of that disk on a daily basis and keep multiple versions at hand. If the data is faulty in production, we can simply swap the volume and restart the Redis servers. The backend service that serves accommodation data to the frontends will automatically connect to the new Redis instances and proceed with stale but valid data, which massively reduces the scope of the incident and gives us engineers and data scientists time to fix the data.

Keeping all relevant data in memory can lead to fast response times, fewer components and an overall simpler backend architecture. However, in computer science there is always a compromise to make if your workload becomes large enough. We described how reading large amounts of data on startup increases startup times and hence impairs key aspects of cloud native computing.

Our solution is based on well-established products like Hadoop, Kafka and Redis, and basic, well-understood mechanisms (e.g., volume backups). One aspect of the described approach one cannot highlight enough are the opportunities for cross-team and cross-function collaboration. By migrating the join logic from the Java service to Hadoop, we now provide data scientists and analysts, QA engineers and other roles within the company comfortable access to our data. On top of this, our site reliability engineers appreciate the simplification of the CI/CD pipelines - we were able to remove the canary deployment - and our on-call engineers can sleep tighter knowing about the disaster recovery.

When was the last time you booked accommodation without checking its photos? Most probably never! Because having imagery information makes our decision-making process much easier and faster. However, picking up the best possible images of a hotel to show to the user is an interesting problem to solve, because it can be a naive random selection or a sophisticated machine learning model to know what the user truly wants at that moment.