Imagine, out of thousands of accommodations that match a user search, you have to select the “best” 25 to show to the user. Which ones would you show- the ones you know perform well or ones that have never been shown before, so that you can discover new high-potential accommodations? In the Data Science world, this is known as exploitation (continue doing what works well) versus exploration (try something new to discover hidden potential) problem and is often explained using the well-known multi-armed bandit problem. The objective of the problem is to divide a fixed number of resources between competing choices to maximize their expected gains, given that the properties of each choice are not fully known at the time of allocation.

To understand why exploration can be beneficial, let's take the point of view of three players involved: our users, our advertisers, and trivago:

Behind every result there is a great process

Over the course of two quarters, we focused on a pure iterative test and learn approach. We ran several A/B tests and used the output of the analyzed results to recommend the next test set up. We tested numerous approaches in parallel and looked into model and engineering complexity, cross test interactions, etc.. In this article, we focus only on one of the approaches.

One of the features in the Ranking model is calculated using historical information on the performance of inventory over the course of a fixed set of days. The feature values distribution follows a beta-binomial model. We are currently exporting the mean of this distribution as a posterior and this default value sets the exploration level. This is not an optimized value, but rather just one reasonable value to use. A potential issue with such a scheme is that it is too greedy, purely exploiting well-performing accommodations in the model.

We call this approach “naive” since it only depends on the number of impressions and clicks the accommodation got in the past.

A problem with the previous approach is its inability to distinguish accommodations with the same level of exposure. For example, there is a very large number of accommodations that are never impressed, and it would not be efficient to cycle through them randomly. In order to explore smarter, we can use information about the inventory we know a lot about in order to identify which accommodations in the unknown pool are most promising.

In practice, we train a model to predict the performance of an accommodation given certain features of this accommodation. We use the historical performance of high-impression inventory to train the model and obtain a prediction function f(item features). This function is then used on low impression inventory to find suitable candidates for future exposure. Items with a high model score but low/no historical impressions would benefit the most in this scheme.

Some data mining techniques used in the course of actions included but were not limited to: EDA (exploratory data analysis), feature engineering, data preprocessing (cleaning and imputing for missing feature values), standardization/normalization of model outputs, etc. 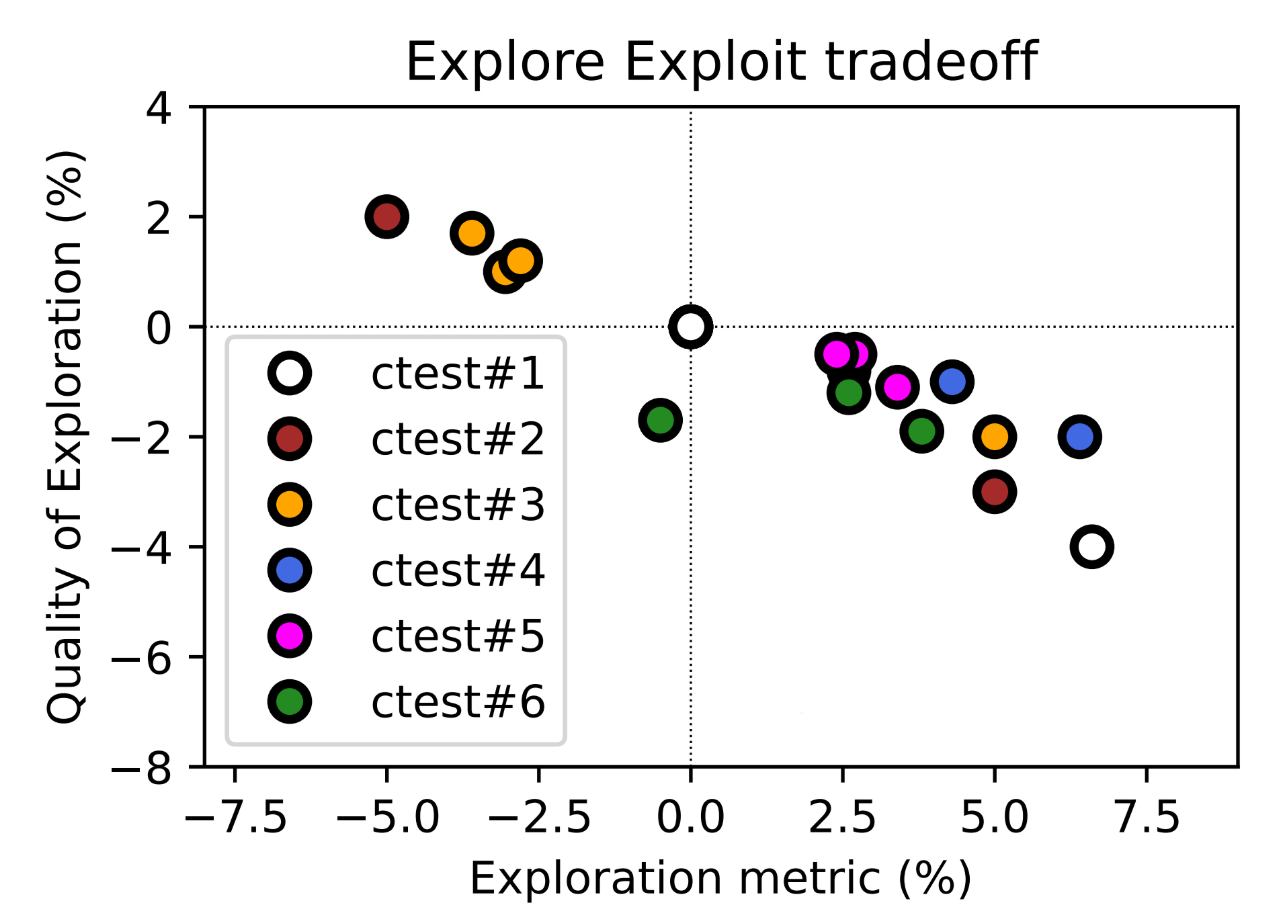 The chart above illustrates the trade-off between extent and quality of exploration for the experiments we ran. Negative exploration in this case means we are exploiting already exposed inventory. Test variants of the same color illustrate different levels of exploration for a particular test. For example, if we look at the two white dots for ctest#1, we can see that more exploration (dot on the right) led to a drop in quality. Ideally, we want to be on the upper right as much as possible, which would mean a high exploration rate with high performance of the newly exposed accommodations. If one connects the Pareto Front, test variants on the line represent the best possible trade-off, while tests below that line offer suboptimal trade-offs.

The Explore-Exploit dilemma comes with a trade-off of impressing unexplored inventory at a specific cost for the users and advertisers, and we seem to have achieved the “golden mean” in our pursuit of optimizing value for our users, advertisers, and trivago overall.

Clickshares for advertisers remained the same as a result of the accepted mechanism, meaning by exploring low-impressed inventory, we did not shift clicks towards a particular advertiser.

As mentioned in the beginning of the article, having control over the level of exploration was one of the objectives. Through a lambda parameter we were able to measure a Pareto Front between the level of exploration and our topline metrics. In case we decide to iterate over this project, this tunable parameter will help us to easily setup pseudo-control variants for testing new A/B experiments.

By simply feeding a set of features into a black box model, we cannot expect the model to perform exploration- it is important to understand how the outputs from the model translate into the metrics we are trying to measure with these experiments. That being said, some models had negative exploration or had worse quality compared to the naive approach.

The Status Quo and Next Steps

The status quo as of today is that we have the exploration mechanism up and running in production within the framework of our accommodation ranking model. We have documented and compiled learnings from the A/B experiments that we ran throughout two quarters. In addition, we improved the code base for our Spark library and auxiliary tooling.

Furthermore, we have created monitoring dashboards to stay on top of trends of the exploration levels in our model over time. Here, a specific range of charts include monitoring of:

This along with the learnings we have gained from our experiments will serve as a starting point when we decide to tackle the exploration problem in even greater detail.

For an accommodation metasearch, like trivago, with a vast inventory to compare across and rank accordingly, the Explore Exploit dilemma is a very challenging issue. The challenge can be overcome by combining classical approaches to exploration with model based approaches in order to identify the most promising inventory in the unknown pool systematically.

While working with data and analyzing the interactions of our users with the products we have today, it is essential to understand their behaviors by tracking their past actions, such as opening notifications, interacting with a blog, or creating a new login in the platform. In that context, the attribution study refers to the method of grouping together all of those actions in a specific pattern to generate one desired end result.

In the last few years, organisations have been increasing their investments in building Machine Learning (ML) based systems. In practice, such systems often took longer than expected to be built or failed to deliver the promised outcome. Data availability and quality have been among the most significant reasons behind this phenomenon. Since each organisation had its custom problems, open datasets or even logged data were not always directly usable. As a result, data collection and annotation processes became more crucial, yet remained under-documented.